An Exception is an unusual or abnormal condition that occurs during the execution of the program. If Exceptions are not handled properly or taken care,the program will terminate abruptly  or provide wrong results. In other word,Exceptions are events that interrupts the normal flow of the execution.(Disruption during normal flow of execution).
class throwable is used to represent all Exceptional conditions.Exceptions are used for exceptional condition that user program can catch.We need to remember that Error  is different from Exception.Errors are used to catch at normal condition.In some cases errors are not supposed to catch and handle.They may be beyond the control of Programmers. If JVM is not able to allocate memory to create new objects ,during the program execution,the JVM will throw an error. Program will get terminated.In this situation,programmer can not handle 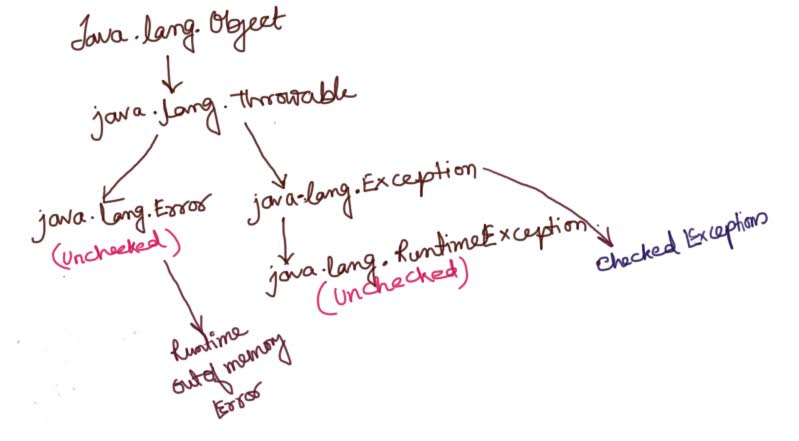 Java’s Exception handling brings runtime error management into object oriented world.
How do we get Exception in java? Exception in thread “main” with some details popularly known as stack trace. Now if user gets such kind of Exception,it is very tough for an user to understand the issue. Instead if we get a clear message , may be, the non technical person will never come to IT team.

Exceptions are encapsulated into object that extends Throwable class.Like any other object we can create Exceptions on the heap using new keyword and a constructor gets called. Read here for Class Exception more.If a method throws an Exception , it must assume that it is caught and dealt with.The good part of java Exception is that it allows us to deal with the problem in one place and allows us to deal with the error in some other place.
Lets check the popular Exception generation code:

Lets observe the below code:

The output of the program will be as below:

Propagation of Exception in realtime:

The base class Exception is defined here.An Exception object can make use of the below methods of the throwable class:

Popular Exception and Error Classes are:

if we try to compile the above code,we will get the following exception:
Unreported FileNotFoundException must be caught or declared to be thrown

Unchecked Exceptions are not mandatory to either declared or handled. They are ignored at compile time by java compiler.Errors and Runtime Exception and it’s sub classes are unchecked Exception. RuntimeExceptions are used to indicate programming error such as logic errors or improper use of an API ,programming bugs etc.If we create our custom exception and extend to RuntimeException instead of Exception,our custom Exception becomes Unchecked. It is dangerous if we do not know what we are doing. Hence best practice is to make custom Exception extending to Exception.

This code will compile fine but fails at runtime.
Exception details:
Exception in Thread “main”
java.lang.ArrayIndexOutOfBoundsException