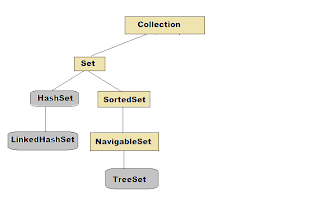 HashSet: The Hashset class extends the AbstractSet class and implements the Set interface.The AbstractSet class itself extends the AbstractCollection class.The HashSet class is used to create a collection and store it in a Hashtable.Each collection refers to a unique value called hashcode.The hashcode is used as an index to associate with the object which is stored in the hash table.This type of storing information in a hash table is called hashing. It is important to note that the HashSet does not gurantee teh order of its elements.Elements may be in any order.
Hashset is introduced in 1.2V in java.

HashSet is best when we do search operation in application. The process is very fast.

The structure of HashSet is given as:

The output of the code:
$javac HahSetTest.java
Note: HahSetTest.java uses unchecked or unsafe operations.
Note: Recompile with -Xlint:unchecked for details.
$java -Xmx128M -Xms16M HahSetTest
The content of the HashSet is [A, B, C]