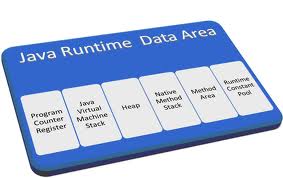 This post is all about a small introduction about how memory is allocated in java.
When JVM is getting started , Underlaying Operating system allocates a chunk of memory to JVM.
This chunk size is dependent on the version of OS, Version of java and total memory available to OS.
So whenever JVM gets some memory it divides the area into the below four parts:

Heap area is to keep the live objects and may contain reference variables.Instance variables are created in the heap.Mainly the heap area is the garbage collect able area.

Stack Area/Memory:
Stack area is to keep all methods and local variables and reference variables. Stack memory is always referenced in Last in First out order. Local variables are created in stack.

Code Area:
Code area is to store the actual code that will be executed as part of the program. It contains the bytecode.

Static:
This section contains the static data,method and blocks.

The problem arises when we talk about the variables. It is bit complicated to understand where they live.
Let me explain the variable part to make it easy…
Variables can be divided into two broad categories..

Local variables mostly declared in methods, even the method parameters are local to method. As all the methods stay in stack, hence local variables stay in stack in the frame corresponding to the method. That is the reason Local variables are called stack variables.
again for instance variable they are mostly declared inside a class. They become active when the object is created. So instance variable stay in heap area,where the objects are stored.The memory allocation depends on the size of the type. say a int will take 32 bits, a long will take 64 bits. JVM will not consider the value of it, It will allocate 32 / 64 bit memory.
Methods:
For methods as I said earlier, JVM pushes themselves to stack.
So if your program have 3 methods
JVM reads it and pushes the methods to the stack one by one.
so the stack will be ..
with Local variables.
One more area we need to think, if the variable holds reference of an object. like..
READ  Class ContentHandler in Java
Powered by Inline Related Posts

For this case, the method calc() will go to stack, with the variable ‘t’. But since we have created a new object here with new keyword, the object will go to heap and the reference will be created with this variable.

So if only give

so public method calc will be pushed to stack with a reference variable t but no object will be crated in the heap.again when JVM gets a command called new Tree(); only then the object in the heap will be created.

In the first look we might think that object creation is calling a method..Method name is Tree()

Not exactly, It is calling the Tree constructor.(Constructor is nothing but a set of codes which runs when we instantiate an object)

9 Essential Points to Consider Before Buying a Tractor

HughesNet is Not Working: Quick Guide in Just 5 Minutes