Inheritance provides us with the ability to make new, more versatile objects from already compiled objects without changing the original object. It also allows us to write new classes based on existing classes without changing the existing class in any way. Inheritance allows descendants of a class (known as child class or subclass) to inherit all of its member elements and methods from its ancestor(Known as Parent class or superclass).

The advantage of Inheritance is that it supports incremental development by allowing us to write new code without affecting the previously deployed code. By inheriting from an existing functional class, we add new methods and data members. This mechanism leaves the actual code as it is and all changes happen to be in defined in the derived class. This also helps in tracking the bugs easily.
Another aspect of Inheritance is that we don’t need the source code of the base class. Rather we need to import that class and write an extend keyword to our class.No copy-paste is required.
Inheritance works as a building block providing incremental support which is very much sustainable. Here B will contain all the public methods and variables of A.
The inheritance path is A->B Not directly supported by java but C will have all public variables and methods of A and B.
The inheritance path is A->C and B->C

Hierarchical inheritance(One superclass and many subclasses):

This is the most real and common scenario when designing a real-time application or issue.
The inheritance path is bird->duck
bird->cuckoo
bird->ostrich

Multilevel inheritance(Derived from a derived class). relax!! the code won’t compile if we do not activate super() and activate the two commented lines. This is just to show how we can do a repetition of data if we do not take help from Inheritance. To avoid the repetition of code, java uses a special keyword called Super, this can be used to refer directly to the superclass constructor.
this is another keyword used to tell java compiler that this will refer to the current object. Let us see one more example

What Is HAS-A Relationship In Java??

When designing our classes, our basic tendency is to design classes maximum code reusability.  Reusable code means less work and maximum output. in this post, I have shown what are the prohibited concept of java in terms of extension. Now think about a scenario, I have a Tree class, I have to leave class and I have Root class as well.

‘is an’ relation or ‘ is a’ relationship refers to inheritance. It is an aggregation.

‘Has a’ relationship refers to composition.

Again for Leaves class, we can have the methods

for Root class, we can have the methods…

Now if you observe the methods of the classes(Tree, Leaves and Root) we can clearly say that Tree can be superclass and Leave and Root can be a subclass. By this approach, we can get more reusable code.
so the structure could be for Tree class.

But is it ok?? Surely no. The purpose of Tree is different from Leaves so as the corresponding methods. And to make a parent-child relationship the child has to follow the IS-A relationship.

Both the answers are false. So this is not a valid parent-child relationship. Now the next question is “if we can not extend Root or leaves to Tree, then how to reuse those codes?? if not possible the code redundancy will be higher. Isn’t it?

To resolve such problem Java has come up with a concept called HAS-A Relationship.
Let us check the feature of HAS-A relationship

Even though HAS-A relationship resolves problems of extension. At the same time, it increases dependency between the underlying components.
It creates a problem in the maintenance of the code.

Cyclic Inheritance: A Prohibited Approach While Designing Inheritance In Java

let me show one more example

For such cases, we are going to get compilation error during compilation but we need to take care while designing this class. It is said the first example of cyclic reference generally occurs while design real-time complex java project.
A second important aspect of java class design, multiple inheritances. This is not supported in java.

This is also one kind of Cyclic reference. 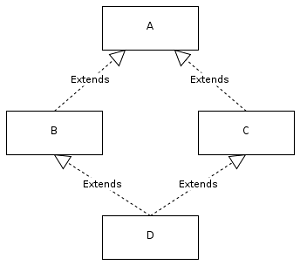 Say for this example Class B and Class C is derived from Class A and A is having a method which is overridden in Class B and Class C. Now if a fourth class D trying to extend both the class, by the principle of inheritance both the modified method will come to D. this creates ambiguity for a compiler which one to take.

Secondly by theory, even if D is trying to override all the conflicting methods, then it has to reinvent the wheel. Code redundancy will increase. It will surely destroy the main idea behind an inheritance that is-code reusability.

This diagram is popularly known as the diamond diagram for Multiple inheritances.
Multiple inheritances are not directly supported by java. But by using the interface we can implement the same. A class can not extend more than one class at a time but for an interface, there is no such limitation.
Now, wait for one more concept. Every class in java extends class Object. Class Object is the superclass for all class we create in java. It is the job for the compiler to check and update the .class file accordingly.
Like if you write a class like below:

The java compiler will transform the same into a .class file as…

Any class that does not explicitly extend another class implicitly extends object.
This is how java has removed the diamond problem.

In java, Inheritance concept came to reduce the number of code line i.e code redundancy. Say in a college we have some student, lecturer, principal. Now for a student, we can have n column, so the corresponding class design will be.

Similarly, for the lecturer class, we will have…

for principal we will have–

now if you observe closely most of the code is redundant. To get reduce redundancy we can create a common class and can derive more special classes from it.

Similarly, for the lecturer class, we will have…

for principal we will have–

If you observe closely the super method is taking care of default value’s initialization and specific values specific to the class are mentioned in the corresponding class. This is inheritance in nature.
the College_person becomes the parent for all class student, lecturer and principal.

So the conclusions are–

here Parent class is an independent class hence
p.method1() is a valid method call
but
p.method2() is invalid as in Parent class, method2 is unavailable
so we will get a Compilation error
Error Details:
Can not find symbol
symbol:method method2()
location: Class Parent
Conclusion:
The methods very specific to the child is not available to Parent. So all child-specific methods can not be called with parent reference.
Case-2

As Child class is extending to Parent class hence by default method1 is available to Child class.
hence both the method calls are valid

Conclusion:
For the valid parent-child relationship, whatever the parent is having by default will be available to a child
Case-3

The Enum is treated as a class.

will be transferred by the compiler as…

Since the underlying concept is class, the very next question arises as can Inheritance concept works for enum? Let us see a few concepts…

With the above statements, we can conclude that the inheritance concept is not applicable for explicitly. Hence we can’t use extends keyword for enums.

However, an enum can implement any no of interfaces simultaneously.

Conclusion:
Child reference can not be used to hold the parent class object. The last point is to keep the IS-A direction one way, Child to parent. Java supports Child to parent direction. Not the other way round.Square IS-A shape, but not necessarily Shape IS-A Square.
That’s it for today!!.