Introduction to Static Keyword in Java

So if we want to have one piece of storage for a particular piece of data, regardless of how many objects are created or even no objects are created, Or a method that is not associated with any particular object of a class. We can call that method if no instance of the class has been created. In both the scenario we can achieve using the static keyword.

When we declare variables(s) or method(s) is/are static, it means that the data or method is not associated with any particular object instance of that class. Thus even if we never create an object of that class, we can still call them or access the piece of static data.

To remember easily we can say anything with the static keyword (modifier) associated with it will be the property of the class but not the property of the object. These are common to all instances of a class. Since there will one class and many objects are created from it, we can say the static keyword associated things are created only once and shared among the objects of that class.

This is somewhat a global variable or global function concept. The meaning of static varies from context to context.  Static things load first while we execute any program. Static elements get executed only once at the beginning of the program. Java libraries contain a huge set of static members.

Static keyword can be applied to

An interesting thing, a static method can access the members of the class bt creating an object of the class. In that case, members can be static and non-static.

The restriction for static methods are as follows:


The output of the code: 28 In the above example if we remove the static modifier from the sum subroutine, it will become a nonstatic method. In that case, the static main will try to access the nonstatic sum() method. This is not allowed in java.JVM will throw the below exception: Exception in thread “main” java.lang.Error: Unresolved compilation problem: Cannot make a static reference to the non-static method sum(int, int) from the type MyStaticTestDemo at com.techtravelhub.MyStaticTestDemo.main(MyStaticTestDemo.java:8)

A block that is loaded and executed as soon as JVM loads a java class. Even this happens before the execution of the main method.
There is a popular question asked to write a code to print Hello World without main. The same can be done through this.

A java class can contain one more static initialization block. The static block syntax is as follows:

A static initialization block is invoked implicitly/automatically as soon as the class is loaded.
A real example

We need to terminate the code as after this the JVM will look for the main method which is not present and gives an error message.
$javac myDemo.java
$java -Xmx128M -Xms16M myDemo
Error: Main method not found in class myDemo, please define the main method as:
public static void main(String[] args)
or a JavaFX application class must extend JavaFX.application.Application

The advantages of the static block

now if we write two lines of code:

at this point, t1.i and t2.i will share the same i and have the same value as 10.
There are two ways to access static data:

Remember that static variables are like normal variables and not constant hence we can do any operations on that variable like- t1.i=ti1.i+1; this will increase the i value by one and i becomes 11. Now all the places where this i is referred will get i=11

here is one example: 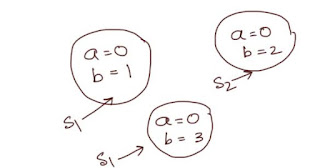 It is often told that static methods are not proper object-oriented design as they have the semantics of a global function. And with static methods, we do not send messages to the objects as there is no this keyword support. However, they are pragmatic and useful.

Import directives or statements provide us to refer to a class. like javax.swing.JPanel for JPanel. If we see the directive is a little complex and compound in nature.Every time we need to mention in order to use them.To refer the static members we need to mention package name and variable name like-Math.Sqrt or System.out.
static imports are a little different thing than class, methods, and variables. The purpose of the static import eliminates the need of the qualifying a static member with the class name. The static import is similar like normal import.

Use of an interface:

Similarly if we import java.lang.System.out then we can directly use out.println() instead of System.out.println().
static import statements requires a (packageName) even for classes in the standard package like java.lang. So it is not possible to do a static import from a class which stays in the default package.
Another Example:

The conclusion on Static keyword in Java