We heard a lot about this beautiful place -Medak. It is a place of church (CSI),many dams,and fort. First one fine evening we planned to go to this trip in a gate-together. Medak is situated around 100KM from Hyderabad via Outer ring road. It is well connected via Rail too. The nearest stop is Wadiaram around 30 KM from Medak. The popular mode of transport is Bus service. However sourabh and me are two gear head persons,we decided to go by our car.

Medak played a very important role in the history of Telengana.It was ruleed by Chalukya’s, Chodas, Kakatiya’s,Velema’s, Reddy’s followed by Qutub shah and Nizam dynasty. The original name of Medak was Siddipuram. Later it was changed to Gulshanbad , then MethukuSeema, finally Medak.

After lot of contemplation about covering the places,finally the plan was as follows:
1st Day:
2nd Day: 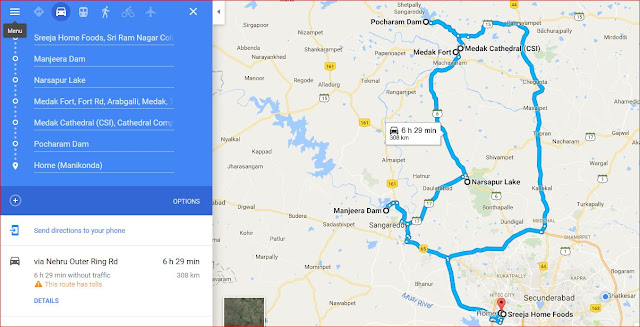 We started on Saturday (4th March-2016) at around 8:30AM from home and stopped at Pakwan for a cup of tea.We had freshen up , had 2 cups of tea and finally started at around 9:30AM. It was a leisure trip and leisure started within 5KM of our travel.As the distance was very near, we decided to take it little easy.

From Gachibowli we took ORR(outer ring road). The road was nice,clean and any kind of obstacle free.Being Saturday,the traffic was also below average. We maintained both the car at 110KM/hr without any issue. The journey was smooth too.
Therefore we exited from exit number 3, toll was Rs 50 and we took Mumbai Highway NH 65. Just after Koulampet, we had to take right and crossed IIT hyderabad. However Google map directed us correctly to the dam.At around 11:30AM we reached to the Manjeera dam. Initially we saw Crocodile pond with crocodiles and bird’s cage. 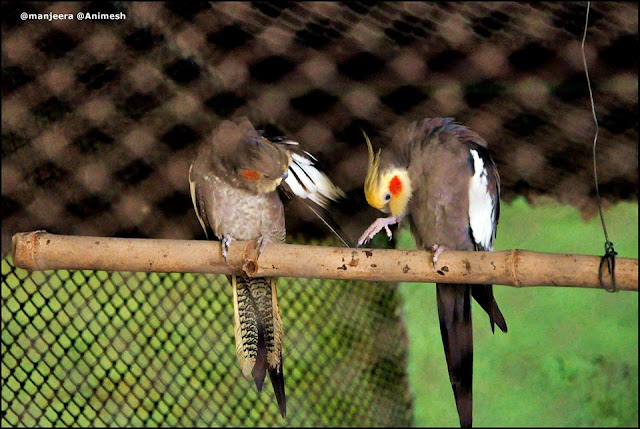 Then we went to dam. On the contrary March was not the right time to explore Manjeera dam. Gates were closed and water level was low.But the view of the lake was just awesome. There were no much visitors, the canteen was closed. There was a  small display of the flora and fauna in the dam compound. We watched that. Master Riku seemed enjoying  a lot. 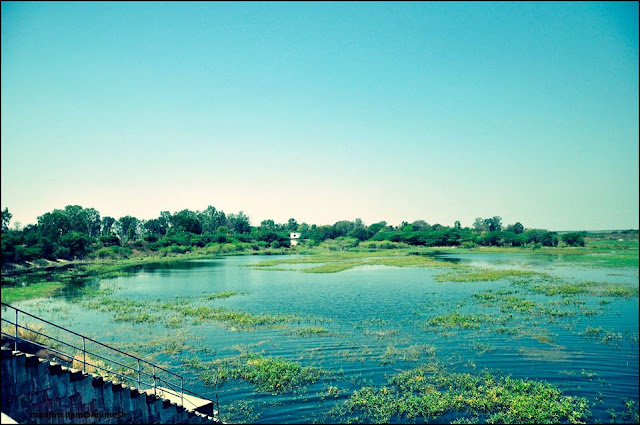 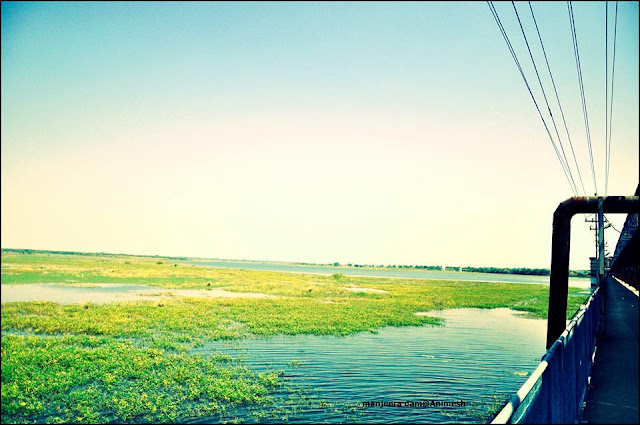 Next was to find a restaurant to have our breakfast. Luckily, near the IIT Hyderabad, We found one with AC family restaurant. The food was ok. We had Idly,masala dosa, coffee and chilled Lassi.Language became little barrier in this area, but somehow we managed.
At around 1:30 PM we started again towards Narshapur Lake and forest. As a result of heavy heat, the forest in either side of Narshapur became brown. Narshapur became a town now a days and was developing at a very fast pace. Moreover jungle village no more offered a jungle beauty. I trust that during monsoon it could be a treat to the eyes .

However the Narshapur Lake was a big disappointment. It was surrounded by locality.They throw away garbages to it. It was dirty.We did not spend much time here. Govt or local could have taken care of this. I crossed my finger that this would be one of the hanging place in near future.
The jungle sighting was just great. But could not compromise the air condition of the car in order to take fresh breath as it was really hot outside. 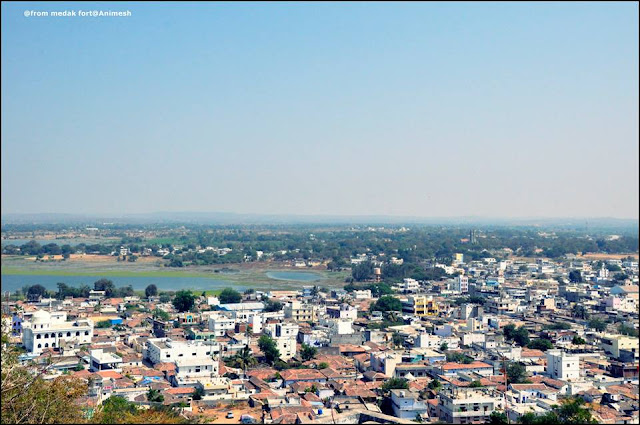 We headed towards Medak. At around 2:00 PM we stopped in a dhaba which offered cubicle style seating arrangement. We had to fresh up. We stopped here. A cup of tea and some chicken item was served.We started again to our destination -Haritha Hotel.At around 4PM we reached to the Haritha Hotel,Half way to the fort. The road till Hotel was narrow but motorable. We parked our cars just in front of the Hotel.The hotel had 4 rooms. Every room had its own uniqueness.

Room Numbers:
101- The room was ok in size but has a bigger bathroom.
102- The Suite-The rom size was 20ft*20Ft and had a 10ft*10ft seating area.
103-This was having a washroom sized-15ft*12Ft.
104-typically all standard sized but having a big attached balcony overlooking the medak city.

All rooms had a common big balcony from where we could see the CSI, Lake and the city.If you are going in a gang (big team), the night would be the best part. 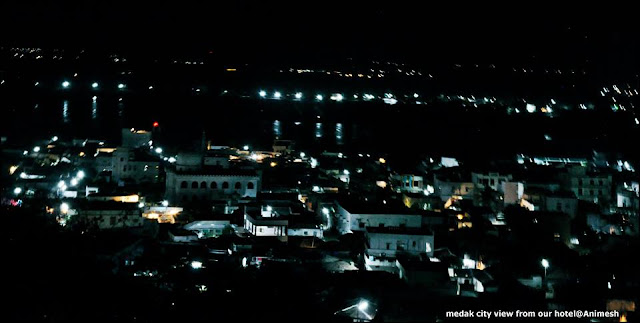 The hotel was having a kitchen and offered us lunch at 5:30PM.The food was tasty and little bit spicy.That day the dinner facility was not available so we had to go to the market to get a decent hotel.The Medak market was having lots of restaurants.We got one just beside the CSI. It was Swagath hotel.We packed our food and started to return. While driving via Medak streets we found that there were lots of medical shops,garage,ATMs,puncture shops.We chit chatted almost till midnight. The night view was also great. you can gossip till what time you want.

Next day, we got up little late,had tea in the hotel itself. The caretaker of the hotel was kind enough to stretch our stay till lunch. We dumped all the luggage in a room and went to explore the famous fort.
Like other forts, this one was not maintained properly. There were no security guard,no entry fee,no guide.The leftover part of the great kakatiya dynasty offered us a great way to see the engineering marvel which was still standing over decades. 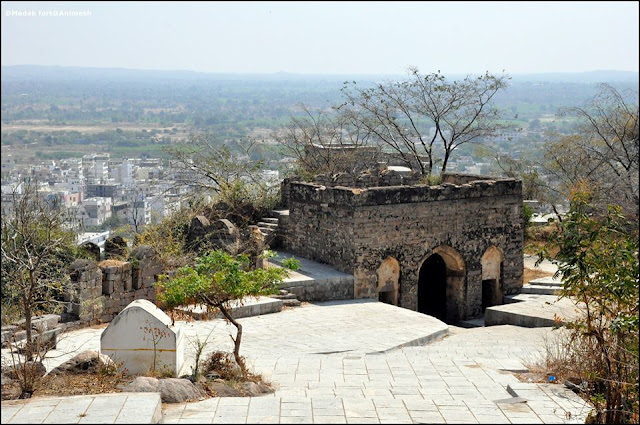 Trip to medakThe fort was built in 12th century by famous Pratapa Rudra(Kakatiya dynasty). The original name of the fort Methuku Durgam(Cooked rice). There were 500+ steps to reach to the top of the fort.The fort was not comparable with Golkonda but occupied more than 100 acres of land. The elevation of the fort is 1450ft. 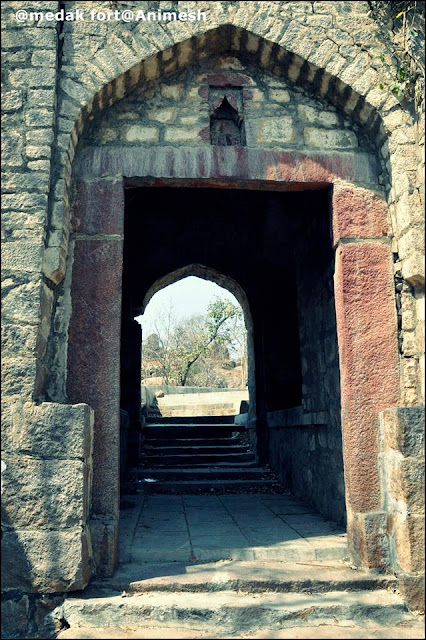 The more we venture into the fort, more we understood that this marvel represents the blend of Hindu Muslim culture.The fort was having a small lake, a barrack and a warehouse. There was also a canon perched at top installed by Qutub shahi. Except these there were boundaries,arches,gates,grand Mubarak Mahal(Now renovated and converted to Haritha Hotel) and brass gun(10 feet long).

We had to take steps to go to the top.The steps were steep,slippery bit scary. There was only a single approach road lead to the top.We had to negotiate some critical bends to go to the top.  There were three gates,Prathama Dwaram followed by The Simha Dwaram and lastly Gaja Dwaram.As we had a kid with us, one couple had to stop in the midway. The scorching sun made our journey very tough.We 4 ventured towards the top.There was a mosque build by Qutub Shahi on top of the fort. It was maintained and renovated but not operational. We went till end. The top was vacant but beautiful and cool.There was a huge emptiness around us. We did some photography and started to climb down. 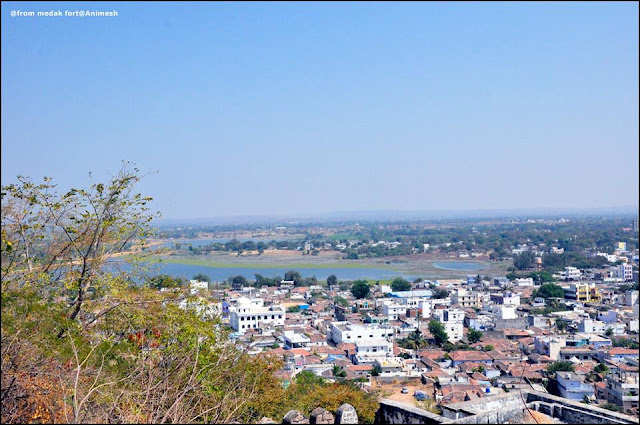 The fort was badly managed without any security guards or police.There were no guide available on demand. Coming back to security aspect of the fort, We had seen people drinking and playing cards in the bushes of the fort. So it is always better to go in a gang. since there was no light facility on the fort road, avoid walking or exploring in the night. It would be safe to come down before dusk. 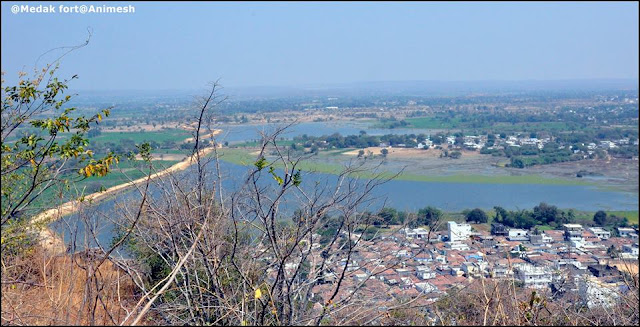 We took our luggage from Hotel and came to our car. The security could not save the cars from the monkeys however there were footprints on the car, a lot of them.We had to wash car.
Our next destination was to go for Medak Cathedral, consequently the cathedral is a synonym for Medak and is very popular. Furthermore it is the largest diocese in Asia and second largest in world just after Vatican. The Cathedral was built in Gothic style. Hence it was inaugurated in 1914 and was completed in 1924. It was a joint  effort from the farmers and Thomas Edward Harding (Main architect of the CSI). The main tower of the church is 175feet tall.It can accommodate as many as 5000 people at a time. The main attraction of the church was 3 magnificent stained glasses  window depicting the life of Jesus.

The floor design is also very interesting, it is a mixture of six color tiles-red,brown,black,yellow,chocolate and grey. The church roof was made sound proof by some sponge like material. It is open from 7AM to 5PM everyday.There was a so so toilet facility just opposite to the church.

it was said that Nizam of Hyderabad discovered that the church would be higher than Charminar and he then made an effort to reduce the height of the church.

Being Sunday  it gave us the opportunity to hear the prayer. Mostly it was in telegu.He hardly understood anything.Photography was not allowed inside the Cathedral. We switched off the camera. We have seen people using mobile camera to picture the holy moments. 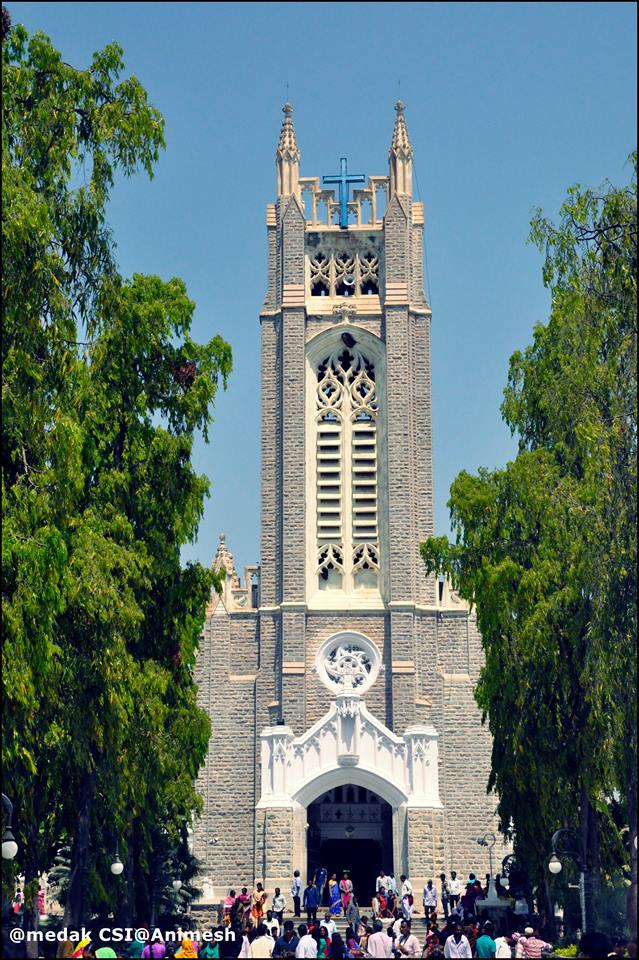 After seeing inside of the church , we started to explore outside of the church. In addition was a garden surrounding the church. The garden was full of pilgrims who were relaxing. Local made ice creams and ice golas were available to crunch the thrust . We ordered one for Riku. 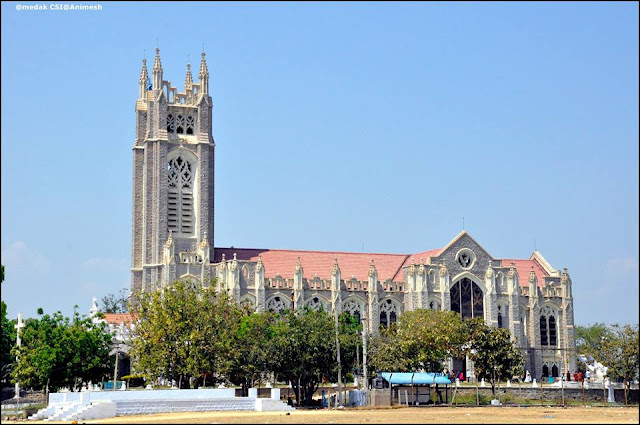 Our next destination was pocharam lake and the famous haunted building. We parked our cars next to the building.There was a boating facility. We booked one and started to venture the lake. It took us to the near by island.The trip was for 30 minutes. We came back to the land and headed towards the cars. This time we looked at the haunted building. I felt that this building could have a place where people used to take rest. I also noticed some evidence of a tea stall. But that day there was nobody.
I kept this secret (about haunted building) from the group.
Some local said that building belonged to Nizam. Btw the Reservoir served as a storage point on Allair river.

However, coming back to the dam, the dam was massive. I heard that the lake was home for crocodiles,turtles and birds.There were nine island inside the lake. They were the major breeding places. We could not see crocodiles and turtle but saw few birds. We spent some quality time near the dam. The lake was real peaceful during afternoon time.
The Pocharam wild life sanctuary is spread across 130 sq KM . It was the hunting ground of Nizam of Hyderabad. It is famous for different flora and fauna.After talking to the locals, we came to know it was very difficult to sight the animals during summer. We had to drop the plan to visit sanctuary.
Only came to know that  the major trees of the sanctuary were Babul and Pistia.
We started our journey back to home. 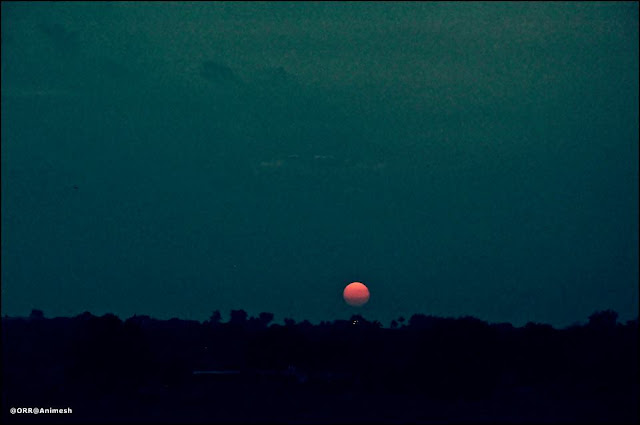 3 thoughts on “Trip To Medak:: Weekend Gateway From Hyderabad”